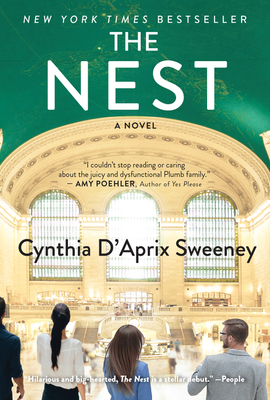 “Welcome to the strikingly dysfunctional Plumb family: four siblings connected by little more than 'The Nest,' a joint trust fund that each has earmarked to support their unrealistic lifestyles. When Leo, the older brother and the center of the Plumb family universe, injures himself and a 19-year-old waitress in a scandalous car accident and endangers 'The Nest' just months before the funds are to be made available, the siblings come together for damage control. Sweeney artfully touches on each family member as they scramble to save the precarious lives they have built for themselves, bringing light and humor to her characters' various plights. Funny, thoughtful, and filled with unique and complex characters -- this book is a must-read.”
— Jennifer Oleinik (E), University Book Store, Seattle, WA

A wickedly smart, funny, and deeply felt debut novel about four adult siblings and the fate of their long depended-upon family inheritance

On a wintry night in New York City, Melody, Beatrice, and Jack Plumb gather to confront their charismatic and reckless younger brother, Leo Plumb, who has just been released from rehab. Leo’s bad behavior before entering rehab, culminating in a car crash while under the influence-a nineteen year old waitress beside him-has left the Plumbs’ joint trust fund, “The Nest,” as they’ve taken to calling it, endangered. All four siblings, at very different places in their lives, believe that this money will solve a host of self-inflicted problems and their consequences. And until Leo’s accident, they’d been mere months away from receiving it.

Can Leo get the Plumbs out of this mess, as he’s always been able to do for himself before? Or will the Plumb siblings have to do without the money-and the future lives-they’ve envisioned? As the siblings grapple with family tensions, old histories, and the significant emotional and financial cost of the accident, Sweeney introduces an unforgettable cast of supporting characters: Leo’s stalwart ex-girlfriend who now thinks that maybe, just maybe, he is capable of change; the waitress whose life was shattered in the accident; the Iraqi war veteran who falls in love with her; and a retired, grieving firefighter with a very big secret.

Tender, funny, and deftly written, THE NEST explores what money does to relationships, what happens to our ambitions over the course of our lives, and the fraught but unbreakable ties we have with our families.

Cynthia D’Aprix Sweeney is the author of the instant New York Times bestselling novels The Nest and Good Company. The Nest was a Barnes & Noble Discover Great New Writer’s pick and named one of the best books of 2016 by People, the Washington Post, NPR, Amazon and others. Sweeney’s work has been translated into more than 28 languages. She has been a guest on Today, Late Night with Seth Meyers and NPR’s All Things Considered. The Nest has been optioned by AMC Studios and is in development as a limited series. Sweeney holds an MFA from the Bennington Writing Seminars and lives in Los Angeles with her family.

“The Nest ambles along so beautifully, what a pleasure to read! It’s a wise, funny, compassionate family drama, full of irresistible surprises, witty conversations, and necessary emotional truths.”
— Jami Attenberg, author of The Middlesteins

“In her intoxicating first novel, Cynthia D’Aprix Sweeney has written an epic family story that unfolds in a deeply personal way. The Nest is a fast-moving train and Sweeney’s writing dares us to keep up. I couldn’t stop reading or caring about the juicy and dysfunctional Plumb family.”
— Amy Poehler

“Cynthia D’Aprix Sweeney delivers an acerbic satire of the leisure class while crafting an affecting human story that embroils us utterly in the fates of the Plumbs...This book keeps its blade sharp and its heart open.”
— Matthew Thomas, author of We Are Not Ourselves

“The Nest is a trenchant, darkly funny, and beautiful novel.”
— Bret Anthony Johnston

In her debut, Sweeney spins a fast-moving, often-humorous narrative, and her portrait of each sibling is compassionate even as she reveals their foibles with emotional clarity...assured, energetic, and adroitly plotted...an engrossing narrative that endears readers to the Plumb family for their essential humanity.”
— Publishers Weekly

“[A] generous, absorbing novel...Sweeney’s endearing characters are quirky New Yorkers all... [a] lively novel. A fetching debut from an author who knows her city, its people, and their heart.”
— Kirkus Reviews (starred review)

This dysfunctional family novel, arriving in March, has best-seller potential written all over it. Scenes in The Nest, which follows four adult siblings and the inheritance shared between them, play out cinematically... certainly every bit as entertaining as a movie, too, and impossibly witty to boot.
— Elle

“As siblings struggle with money woes, their humble inheritance turns into a full-blown cash cow. There’s only one problem: the black sheep of the family.”
— Cosmopolitan, Cosmo Reads