All the Way: My Life on Ice (Paperback) 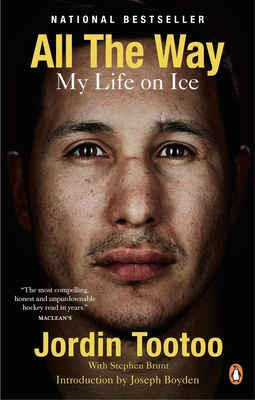 The bestselling story of a true warrior's toughest battle, now in paperback
It seemed as though nothing could stop Jordin Tootoo on the ice. The captain, a fan favourite, a star in international competition, Tootoo was always a leader. And when he was drafted by Nashville in 2001 and made the Predators out of camp in 2003, he became a leader in another way--as the first player of Inuk descent to suit up in the NHL.
All the challenges and pressure would have been more than enough for any rookie, but Tootoo faced something far more difficult: the tragic loss of his older brother before his first shift for the Predators. Though he played through it, Tootoo suffered from many of the same problems that have plagued so many people from his community. In 2010, he checked himself into rehab for alcohol addiction. It seemed as though a promising career had ended too soon.
But that's not the way Tootoo saw it and not the way it would end. Told in Tootoo's bold voice, with contributions by Stephen Brunt, arguably one of the best sportswriters, All the Way is the searing, honest tale of a young man who has risen to every challenge but all too nearly fell short in the toughest game of all.

JORDIN TOOTOO plays right wing for the NHL New Jersey Devils and has also played for the Detroit Red Wings and the Nashville Predators. Of Inuit and Ukrainian descent, he is both the first Inuk player and the first player to grow up in Nunavut to participate in the NHL.

STEPHEN BRUNT is currently with Sportsnet, co-host on The FAN 590's Prime Time Sports with Bob McCown, and contributing writer for Sportsnet Magazine and sportsnet.ca. Previously, he was a columnist at The Globe and Mail. He is the author of the #1 national bestselling Searching for Bobby Orr; Gretzky's Tears; Facing Ali; The Way it Looks from Here; Second to None: The Roberto Alomar Story; and Diamond Dreams: 20 Years of Blue Jays Baseball. Online: https://twitter.com/jtootoo22 http://www.jordintootoo.com/

"The most compelling, honest and unputdownable hockey read in years." --Maclean's

"Tootoo's book ... hits as hard as he does, with nothing held back." --Winnipeg Sun

"[One] of the year's notable sports books ... [Tootoo's] story comes at the reader like a slapshot, freighted with Tootoo's pain and power." --The Star-Phoenix