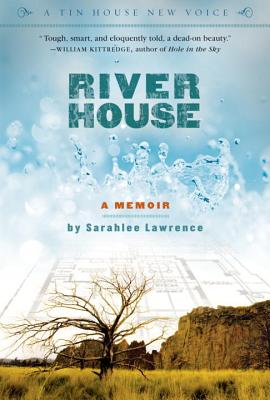 By Sarahlee Lawrence
$16.95
Email or call for price.

An exquisite blend of memoir and nature writing, River House is one young woman's story about returning home.

An exquisite blend of memoir and nature writing, River House is the story of a young woman returning home to her family’s ranch and building a log house with the help of her father. An avid river rafter, Sarahlee Lawrence grew up in remote central Oregon and, by the age of twenty-one, had rafted some of the most dangerous rivers of the world as an accomplished river guide. But living her dream led her back to the place she least expected—her dusty beginnings and her family’s home. River House is a beautiful story about a daughter’s return and her relationship with her father, whom she enlists to help brave the cold winter and build a log house by hand. Together, they work through the harsh winter, father helping daughter every step of the way.

Sarahlee Lawrence was born and raised on her family ranch in Terrebonne, Oregon. After a decade spent studying, traveling, river rafting, and earning an MS in Environmental Science and Writing from the University of Montana, she returned to the ranch, where she owns and operates an organic vegetable farm.

"Handy with tools and rafts, a good neighbor, and a mighty fine horsewoman, Lawrence is also adept with language, writing with arresting lucidity and a driving need to understand her father, her legacy, the land, community, work, and herself. A true adventure story of rare dimension." —Booklist, starred review

"With her keen eye and talent for writing about the natural world, Lawrence pays homage to the American West. . . Lawrence is one of those remarkable young women spawned by the American West who are adept at running wild rivers, operating heavy equipment, and building a log home, all evocatively told in this informative book."—Publishers Weekly

"It's messy, this building of houses and relationships, but the experiences give this memoir an existential grace."—Kirkus Reviews

"In her stirring memoir, River House, Sarahlee Lawrence describes a yearning to return to her rural Oregon home that’s every bit as powerful as was her youthful need to escape it. . . Lawrence brings her connection to home alive in the classic Oregon-lit tradition of turning landscape and climate into a beautifully surly character."—Randy Gragg, Portland Monthly

"It's very simple: If you call Oregon your home—not just Portland, but this whole big awkward schizophrenic state—then you need to go to a bookstore and purchase a copy of Sarahlee Lawrence's River House. . . if there's any justice, it'll become an Oregon classic."—Alison Hallet, Portland Mercury

"Astonishing. . . [River House] resonated more deeply with me than anything I've read about Oregon in a long, long time. . . River House pulses with movement."—The Oregonian

"Lawrence writes with remarkable candor about her loved ones; the joys and pitfalls of life in a small community; and the creeping development from upscale Bend 40 miles away. She is in her element writing about nature, and it's a treat to share her journey."
—Seattle Times

"A memoir narrative that pivots off the worlds of landscape and wild water."
—The Salt Lake Tribune

"It's a sturdy, honest, and direct recounting of the author's audacious life in unusual places, and is a beautifully clear exposition of her relationships with her parents, neighbors, and friends, living and dead."
—Minneapolis Star Tribune

"Lawrence’s voice, like the desert, is beautiful in its simplicity, while she herself embodies the strong womanhood of the American West. Like her many skills, this debut book is versatile—resembling, at intervals, a memoir, nature-adventure writing and easily digestible rural philosophy. Her simple prose makes her adventures in construction, gardening and horse-tending seem as thrilling as Tambopata’s rapids. Lawrence’s writing is honest and, like the river that begins her memoir, raw."
—Salt Lake City Weekly

"More action and grit than soul-searching and pretty writing, this memoir ends up a love note to Central Oregon."
—The Eugene Register-Guard

"Lawrence’s debut book forecasts the beginning of a new career – that of a talented writer. Her descriptive prose paints a vivid and respectful portrait of the natural world, which she clearly treasures. . . River House is a rare accomplishment with a narrative that flows and ebbs like the mighty current of life."
—Durango Herald

"[Sarahlee Lawrence] has crafted a memoir with sentences that draw one’s attention like a firefly buzzing around your head in the heat of summer."
—Cascadia Weekly

"A transfixing read. . . the end of River House leaves a reader begging for a sequel."—New West

"An engaging piece of literary work about passion, travel, love, and what it means to come home."—Wend

"An exquisite story of personal strength and nature."—Fort-Wayne News-Sentinel

"River House is about rediscovering family and working through the compromises involved in finding your life, the people and days you actually love. It’s tough, smart and eloquently told, a dead on beauty. Enjoy. I surely did."
—William Kittredge, author of Hole in the Sky and The Willow Field

"Log by log, and word by word, Lawrence locates her love and affirms her commitment to her parents, her place, and the natural world. If you love wild water and land, if you value hard work and family, this is the book not to miss."—Phil Condon, author of Clay Center

"In River House, Sarahlee Lawrence tells a story as carefully hewn and crafted, as lovingly rendered, as the log cabin she and her father have built together in the high desert of central Oregon. It’s a story of roots; the pull of the land that calls her back to the heart of her family farm. And it’s the story of wings, the journey of a father and a daughter each coming to terms with a dream."—Judy Blunt, author of Breaking Clean

“Lawrence is a promising voice of nature writing’s next generation as evidence by the rich and poetic language that matches the breath-taking scenery it describes.”—National Book Critics Circle

“Sarahlee Lawrence has experienced more adventure in a couple of decades than most of us can hope for in a lifetime.”—Orion Magazine

"Only once before have I seriously considered calling in sick so I could read nonstop. [River House] made the second time. . . This is not just a book. This is more."—Walla Walla Union-Bulletin