Wilma Mankiller: How One Woman United the Cherokee Nation and Helped Change the Face of America (Hardcover) 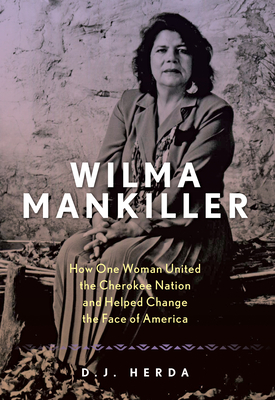 Wilma Pearl Mankiller's great-grandfather survived the deadly forced westward march of Native Americans known as the Trail of Tears. She rose to lead the Cherokee Nation more than 150 years later as principal chief, the first elected female chief of a Native nation in modern times. Throughout her reign from 1985-1995, cut short only by her own severe health challenges, she advocated for extensive community development, self-help, and education and healthcare programs that revitalized the Nation of 300,000 citizens. Wilma Mankiller will continue to shine as an inspirational example of the faith in her belief that ethnicity should never be forgotten--nor come before family unity, society, and country.

Born and raised in Chicago, D. J. Herda worked for years at The Chicago Tribune, as well as at numerous other Chicago-area newspapers and magazines, before becoming an internationally syndicated columnist. Herda's interest in Western Americana goes back to his childhood. He is the author of Calamity Jane: The Life and Legend of Martha Jane Cannary, The Never-Ending Lives of Liver-Eating Johnson, and Etta Place: Riding into History with Butch Cassidy and the Sundance Kid and articles for American West, Arizona Highways, and other magazines. D. J. Herda has lived in the Rocky Mountains of the southwestern United States for nearly three decades.