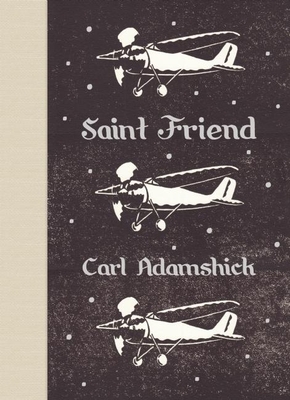 Saint Friend is that rare book that speaks in the voice of a generation. The voice comes from an acclaimed young poet who, after working years in obscurity, was f ted with the prestigious Walt Whitman Award for his first collection. This, his second book, is a freewheeling explosion of celebrations, elegies, narratives, psychologically raw persona pieces (one in the voice of Amelia Earhart), and a handful of punchy lyric poems with a desperate humor. It is, as the title suggests, a book exalting love among friends in our scattered times. Opening with a five-page anthem called "Layover," it begins: They keep paging Kenneth Koch at the airport.
Someone should let the announcer know
he is dead, that there is no city he can go to,
that no one is expecting him. Once, I applied
to be a horse . . .

Carl Adamshick's first collection, Curses and Wishes: Poems, won the Walt Whitman Award in 2010, and was published by Louisiana State University the following year. His book was selected by Marvin Bell. Adamshick's poems have appeared in the American Poetry Review, the Harvard Review, the Missouri Review, Narrative, the Oregonian, and elsewhere. He's received an Oregon Literary Fellowship from Literary Arts and is a cofounder of Tavern Books (Portland, Ore.), which he runs with former Stegner Fellow Michael McGriff. Adamshick was born in Toledo, Ohio in 1969 but grew up in Harvard, Illinois. He lives now in Portland, Oregon.