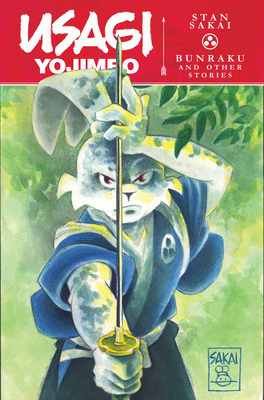 Follow these all-new full-color adventures of rabbit ronin Miyamoto Usagi as he wanders Edo period Japan on his warrior's journey.

Presented in color for the first time, the ongoing adventures of Stan Sakai's seminal and long running series are now being published by IDW. This first volume of all-new material continues the saga of Usagi Yojimbo with the three-part "Bunraku," as Usagi becomes embroiled in a puppet drama where the players are not quite what they seem! Will the aid of a supernatural ally be enough for Usagi to prevent more death? Then, Usagi goes back to his roots as a yojimbo (bodyguard) when he is hired by Lady Mura, a famous writer, to keep her safe on her perilous journey to her father's home.

Plus, a 35th anniversary special where Stan Sakai revisits the very first Usagi story, "The Goblin of Adachigahara", expanding it from 8 to 24 pages and adding new insights into the characters and events, as well as revealing the reason for Usagi's pilgrimage back home. In the final story, Usagi joins his friend the bounty hunter, Gen, and his partner, Stray Dog, in recovering a stolen sword, an heirloom of the Higashi Clan.

Collects the first seven issues of the new Usagi Yojimbo series published by IDW and features an Introduction by Matt Alt, co-author of Yokai Attack! The Japanese Monster Survival Guide.

Stan Sakai began his career by simply lettering comic books as he perfected his art and began working in the industry. He also wrote and illustrated The Adventures of Nilson Groundthumper and Hermy; a comic series with a medieval setting, influenced by Sergio Aragones's Groo the Wanderer. The characters first appeared in Albedo #1 in 1984, and were subsequently featured in issues of Critters, GrimJack, Amazing Heroes and Furrlough. Stan Sakai became famous with the creation of Usagi Yojimbo, the epic saga of Miyamoto Usagi, a samurai rabbit living in late-sixteenth and early-seventeenth-century Japan.

"As an old world adventure, a meditation on art, and even as a history lesson, Usagi Yojimbo is yet another reminder that Sakai is a master of his form." —ComicBook.com